"The Environments of African Literature"

Click here for a PDF of the Conference Program

"The Future of African Literature"

The talk will be based on the idea of 'environments', focusing on two types of environment, the physical environment and the mental environment. The first will look at the ecological concerns that inspired my novel, Oil on Water, accompanied by readings from the book itself. The 'mental environments' section will focus on the 'environment of fear'--a rising tide of unease emanating from world politics today. This environment seeks to limit and diminish the presence of the African, in Africa itself and around the world. In Africa because of repressive and dysfunctional politics, leading to an unprecedented wave of emigration, in Europe and America due to the rise of racist and anti-immigration populist politics. How does the African writer respond to these troubling trends? How does he/she overcome these fears and create art that demystifies the forces militating against the African today? This part of the talk will be accompanied by readings from my book, The Chibok Girls.

Helon Habila was born in Nigeria. He is an Associate Professor of Creative Writing at George Mason University in Virginia. His novels include, Waiting for an Angel (2002), Measuring Time (2007), and Oil on Water (2010). He is the editor of the Granta Book of African Short Story (2011). Habila’s novels, poems, and short stories have won many honors and awards, including the Commonwealth Prize for Best First Novel (Africa Section), the Caine Prize, the Virginia Library Foundation Award for Fiction, and most recently the Windham-Campbell Prize. Habila is a regular contributor to the UK Guardian, and he has been a contributing editor to the VQR since 2004.

His most current book is a nonfiction account of the 2014 kidnapping of schoolgirls in Nigeria titled, The Chibok Girls: The Boko Haram Kidnappings and Islamist Militancy in Nigeria. Habila lives in Virginia with his family. 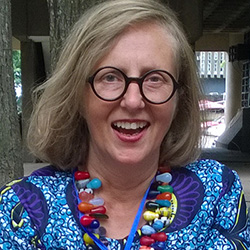 In order for the African Literature Association to fulfil our stated aim of “nkyin kyin – changing oneself: playing many roles”, we shall need to look beyond the well-ordered and air-conditioned spaces that we think of as the publishing environments of African literary scholarship. Journal editors and peer reviewers, I argue, have a crucial role to play in this activist project. The literary scholarship that gets published in academic journals reflects and replicates particular conversations, and privileges authors schooled in certain methodologies. The friendships and collaborations between scholars of African literature based in different regions of the world are evident in the ongoing work and membership of the ALA, and make the organisation and its gatherings distinctive. Yet in order for publishing patterns to shift, we need to build not only better communication channels between north and south, but perhaps more crucially between the different intellectual traditions represented by literary scholars at universities on the African continent itself. Such a re-orientation will arrest and trouble assumptions that what skews publishing patterns is simply that Africa-based scholars are in need of (northern) resources and developmental assistance. Unequal access to resources clearly does influence the publishing patterns of literary scholarship, but this is only part of the challenge we face. Instead I argue we need to articulate explicit and ethical frameworks for enabling dialogue, and for evaluating knowledge production from different parts of the world. This needs to happen at all levels of knowledge production, but crucially at editorial and peer review level.

Carli Coetzee is the editor of Negotiating the Past and Afropolitanism: Reboot, and the author of Accented Futures: Language Activism and the Ending of Apartheid and many articles on African literature and on the ethics of north-south interactions. Her monograph Written Under the Skin: Blood and Intergenerational Memory in South Africa will be published in 2019 in the African Articulations Series (Boydell & Brewer/James Currey). She is an Honorary Research Fellow in the School of Literature, Language and Media at Wits University, and a Research Associate at SOAS, University of London. Her work as the editor of the Journal of African Cultural Studies is part of a larger activist project that seeks to change publishing patterns that privilege northern-based scholars and institutions. She frequently takes part in research and early career mentoring workshops hosted by African universities and organisations. 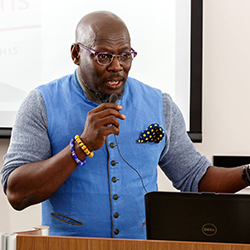 "From Nation-and-Narration to the Diasporic Cultural Economy and Scientific Utopias: Notes Toward a Literary History of African Writing"

This talk will explore the nature of African literary history from decolonization to present times.  Themes such as methodological nationalism, orality and literacy, postmodernism, diaspora, and utopianism and their centrality to how we understand African literature will be traced systematically through the work of various African writers.  At stake will be laying out a procedure for how to think about literary history, both in Africa and in the postcolonial world more generally.

Ato Quayson is University Professor at the University of Toronto and Professor of English at NYU. He has published 13 books and over a hundred articles.  His monographs include Strategic Transformations in Nigerian Writing (1997), Postcolonialism: Theory, Practice, or Process? (2000), Calibrations: Reading for the Social (2003), Aesthetic Nervousness: Disability and the Crisis of Representation (2007), and Oxford Street, Accra: City Life and the Itineraries of Transnationalism (2014). A founding editor of The Cambridge Journal of Postcolonial Literary Inquiry, he has edited the Cambridge History of Postcolonial Literature (2012) as well as An Anthology of African Theory and Criticism (with Tejumola Olaniyan; 2013), and Companion to Diaspora and Transnationalism (with Girish Daswani; 2013). He is currently completing a book provisionally titled On Postcolonial Tragedy: Historical Transition and Ethical Choice.